I have sought to move beyond the notion of tradition as now a day the tradition needs to be understood as a cultural practice connected with the culturally diversified locality as well as modernity. Every second door where I live in Kolkata has a family either immigrant from the same cultural environment, recognized as ghoti - ঘটি or bangal - বাঙ্গাল (after partition) though now mixed and matched with the identity or sharing the neighborhood with the intercountry migrated deep-rooted different cultural peoples of India. So availability of food also diversified and compromised because of the market economy.

So called Bangals (বাঙ্গাল) of West Bengal who left a riverine country now "Bangladesh" with 800 rivers and 265 freshwater fish species, felt themselves proud while expressing the elaborate fish concerned meals from starter to sour with rice, today, satisfy their meals with different, subtle items. 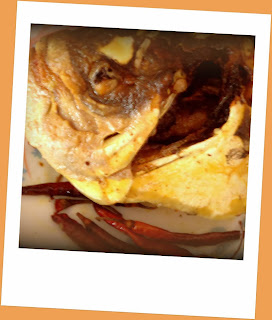 People of Bengal observe a ritual of serving whole head piece of fish to their daughters only for the ceremony of last meal before marriage (ai buro bhat) at their parent's home and for daughter in law's welcome lunch (bou bhat) at their in-laws home. Fish symbolizes prosperity and fertility as well as acts as brain food. Otherwise the Bengali fish feeding principal is to show affection and love to their men (master of the family), favorite person in the family especially their son, respected guest or kutumb and jamai (son-in-law). People are honored by simply placing the fish head on the platter, and somehow tend to impress the person by Bengaliness. Ladies in the family has to be most attentive when serving food. Fish head is held in such high esteem that at the first rice ceremony of young children annaprashan (there was no such ritual for girls those times), even babies are presented with a cooked fish head, though they do not eat it, for its auspicious nature.

There are taboos over eating fish. The Bengali believes, like Eskimos that the fish head adds to his grey matter and the children are given fish eyes to eat so that their eyes may become bright and clear.

Wash the fish head, discard the gill and wash again thoroughly.  Sprinkle a little salt and turmeric on the fish head and set aside. Heat sufficient oil in a deep frying pan, add 2 to 3 whole red chillies, fry until crisp and remove from pan. When the oil is hot, place the fish head in the pan, turn carefully and brown on all sides, remove from pan.

In this section of the food items – Fries and Fritters, Bengalese usually show interest in cooking telebhaja like pakoras rather than bhaja with rice flour (pituli gola - পিটুলি গোলা) - every time supplemented with besan or gram flour because of the easily availability of the besan, I am trying to recall some old recipes as well as Portuguese-influenced fried item like croquettes, homemade fries, which never can be as delicious as kolkata street foods - sinfully delicious fries, fried in repeated usage of the same oil. Besides these fries as a side dish can be served as alternatives for evening snacks or as finger foods for a tea party.