Published by: prasadam Curry-Tarkari
easy plantain stem recipe thor chhenchki
After removing the layers of hard outer stem of banana tree, the tender fibrous inner pith of the stem or core has many medicinal properties and is very beneficial to our health. It is edible as well. The stem is chopped and cooked as a vegetable and is eaten along with rice.

Put the chopped plantain stem or thor, scrapped coconut, chopped curry leaves and green chili, salt, turmeric and sugar in a bowl, mix well and keep covered for 10 minutes. In a pan heat the oil and add tempering of broken red chili, mustard seeds, and kalonji. Add seasoned plantain and cover with a lid promptly to let the flavor of spices burst in the vegetable. Cook the vegetable with the lid on, sit on simmer fire for 8 to 10 minutes or until done.


The utilization of hemp fibers of the banana stem has started almost since 4000-3000 B.C. Kola is in the Bengali vernacular used for the fruit Musa paradisiaca. Fruits are offered in puja and the stems used for ceremonial decoration. Worship of The goddess of wealth, Lakshmi which is observed during the months of October or November comprises of some meaningful symbolic decorations like boats made out of hollowed-out portions of the stem of the sacred plants Banana or Plantain and is then decorated with colored papers and flowers. It is then filled with crops like paddy consisting of certain pulses, bananas and sugar candies are placed in the boat to invoke the blessing of the Goddess Lakshmi as Goddess Lakshmi has reached our home to bless us with her wealth drawing in every household since the time of the history of traditional navigation, the voyages of Bengal traders for safe returning along with wealth from Ceylon or java after having a season of good business.

Evidence from historical notes suggests that traditional navigation forwarded social and religious festivals, which was also carried out as a seasonal phenomenon.

Monsoon wind plays a predominant role in maritime trade and the daily life of the people of Southeast Asia. During the northeast monsoon which brought about the onset of "the trade wind", they used to set out for the voyage with plans of returning during the southwest monsoon as they identified the flow of wind and current was favorable for both the onward and return journey. As the southwest monsoon intensifies, the coastal currents are once again directed northward along the east coast of India and a strong eastward-flowing monsoon current is intensified in the southern Bay of Bengal July-October, the Bengal and Orissa traders sailed their vessels using the monsoon wind in the Indian Ocean in such a manner that they could reach overseas countries. As the southwest monsoon withdraws from the Bay of Bengal, coastal currents along the east coast of India swiftly reverse equator ward from October and persist up to October-December. Seafarers of Bengal and Orissa had a fair amount of knowledge about monsoons. 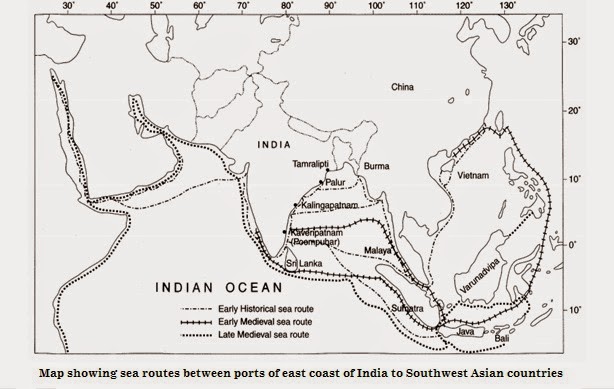 These trading voyages during the northeast monsoon can be corroborated with regional festivals like Asvin Purnima in the month of October, Kojagari Lakshmi puja and Kartika Purnima [full moon day of Kartika] in the month of November and seasonal harvest also symbolized return of the voyagers with wealth and gifts. The festivals were used to be celebrated by the people of Bengal and Orissa since time immemorial and was held on the day of the commencement of sea voyages in the belief and hope that the traders would return with healthy trades and a good harvest. Similarly Khudurukuni Osha is celebrated in the month of September by unmarried girls of Orissa who used to wait for their brothers with wealth. The festival anticipates the return of a safe journey.

Kolakhar  – the host of minerals, the importance of Traditional Knowledge

Plants absorb minerals from the soil, and when incinerated their ashes give imortant products like Yavakshara or Darulawana [ Eng – Impure potash carbonate]. Succulent plants contain a larger proportion of it than their woody counterparts. The existence of Impure potassium carbonate has been known from very ancient times. It is the principal source in India as wood ashes because potash is an indispensable element for the growth of most plants.

Kolakhar , locally known as Athia Kal, is prepared by filtering water through the ashes of a banana tree, which is rinsed once or twice with water to obtain paste daily, a signature dish of Assam, India, has been analyzed for its commercial importance. Traditional use of herbal medicines by Madahi tribe of Nalbari district of Assam like "Omita Khar" is one major Assamese cuisine. Chemical and spectroscopic investigations shows the presence of potassium, sodium, chloride and carbonate, Bromide, iodide, and that carbonate and chloride are the major constituents present in Kolakhar  along with a host of other trace elements, sulfate were found to be absent. The analysis has been able to corroborate to the traditionally known superior quality of Kolakhar  derived from Musa balbisiana colla, in Bengali Biche Kola.

It is similar to most of the people in Assam without much knowledge of its chemistry. Kolakhar  is known to help in normalizing digestive disorder of stomach. In ancient Assam, Kolakhar  was widely used as soaps and detergents for washing cloths and shampooing hairs. Recently, use of Kolakhar  as a cleaning agent has been drastically reduced, yet in interior rural Assam its use for washing purposes still continues. Some women in rural Assam have been able to grow long and healthy hair using Kolakhar  alone. There are many other uses of Kolakhar  in the rural Assam including preventing bacterial attack on freshly cut injuries, making healing faster, to kill leeches and prevent their attack while working in leech-infected agricultural fields and for cure and prevention of certain cattle diseases.

Banana peel ash-extract, widely used by the rural folk in indigenous processing of dry or hard-to-cook beans, was evaluated for chemical composition and potential in reducing cooking time of beans by nearly 50%. The peel ash-extract was found to contain substantial amounts of sodium [0.36 g/ml], chloride [0.07 g/ml] and magnesium [0.04g/ml] ions. Calcium, iron, copper, zinc, sodium and phosphorus were also found in detectable amounts. The taste, flavor and acceptance scores were, in general, higher in beans processed in ash-extract than that of ordinary water. 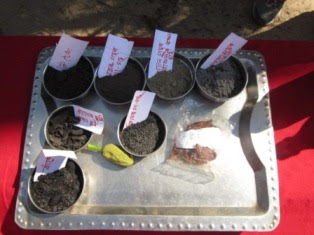 Traditionally, banana trunk, rhizome and peels are most commonly used for the preparation of Kolakhar  amongst the different species of banana plants musa balbisiana, the seedy variety of banana plant is considered the best as far quality of Kolakhar  is concerned. In the usual practices, Kolakhar  is mostly prepared in the winter season and stored for use in the rest part of the year. Parts of the plant is cut into pieces and air dried under sun over several weeks. The dry material is burnt into ashes and filtered with water. In the normal procedure of extraction, ashes are put over a bamboo-made sieve and water is added over it and allowed to trickle down the ashes. The filtrate collected below is called Kolakhar . The ashes were extracted with distilled water. Weighed quantity of ash was suspended in distilled water [20 ml per gm] in a glass beaker and stirred with a mechanical stirrer for 45 min. The mixture was then filtered through sintered glass crucible under suction and the filtrate was used as Kolakhar . Kolakhar  prepared from banana peels traditionally considered to be the best, is found to contain much higher amount of carbonate as compared to other. Lead level is much lower in Kolakhar  derived from seedy variety of banana plant Musa balbisiana as compared to those from seedless varieties. This may be one of the reasons why our ancestors considered Kolakhar  prepared from seedy variety better than those from seedless varieties. Aluminium level is much higher in seedy variety as compared to those from seedless varieties. This may be the added advantage of Kolakhar  from seedy variety for its use as antacid. Vanadium is believed to play a beneficial role in the prevention of heart diseases. Because of the presence of vanadium in Kolakhar  its use may be beneficial for the prevention of heart diseases.

Kolakhar , a traditionally known antacid and popular food additive amongst different communities in Assam, is quite rich in potassium carbonate and therefore can be commercially exploited as a cheap and renewable natural source of potassium carbonate. Because of the presence of vanadium, Kolakhar  can have beneficial effect for heart patients.

With improvement of global economic affordability high intake of ready-to-eat salty foods has become a part of life and people are increasingly facing health risks including high blood pressure associated with high intake of table salt (NaCl). The United States Department of Health and Human Services recommends that individuals consume not more than 2300 mg of sodium per day against 4700 mg of potassium which is more than twice of sodium. Higher dietary potassium intakes may help in significantly lowering blood pressure. Potassium chloride may flavor our food at the same time lower the limit of sodium intake thus helping to lower blood pressure and other physiological anomalies connected with high sodium intake. To lower sodium intake salt substitutes are one option where some or all of the sodium chloride in table salt have been replaced by potassium chloride. An excellent salt substitute, with potassium to sodium ratio in the same breath as in nature, has been derived from banana plant. The salt substitute contains nearly 46% of potassium and 2.6% of sodium. Presence of certain beneficial metals in trace level is an additional feature of the salt substitute. ref: Salt substitute from banana plant [Musa- balbisiana Colla] www.jocpr.com