Lost connections with Bangladesh, but still connected to some extent through them, last connections, my Maa and Baba, deep-rooted Indian - a Bangladeshi, entered India (at that time though was an underdeveloped country) across its porous borders as a refugee, foreigner in their own country (নিজ গৃহে পরবাসী). Apart from the fear of proper food and settlement, they struggled for their existence. They never even uttered their eagerness to go and see how their hometown is, because they always felt hometown means being surrounded by their family, friends and neighborhood which was quite different from the scenario there after the partition. They left their huge property and social recognitions. The emptiness made them somewhat impassable throughout their life. Eventually, they settled here, as an Indian, Bengali. They coped up all of their fall-backs with the stamp of refugee here, secured us, gave us an identity as a human being not a religious puppet, and taught us to live united.

Practically two-third of the total geographical area of the former Bangladesh is now included in the present East Bangladesh and the remaining one-third of the former territorial area of the state of India, West Bengal faced a huge population burst during political division of Bangladesh and migration of country. There can be no doubt, in early days of Bengal, people suffered greatly for shortage in the supply of food due to huge population burst and famine, slowly regular domestic life adjusted and restored.

Districts were having much more similar domestic life of a traditional Bengali in contrast to metropolitan city Kolkata . Kolkata has many other interferences of interstate migrations also, about 3 to 4 communities from Marwar, Gujrat, Panjab, Orissa, and Bihar for business and manual labor.

Bengal is fortunate in having no kind of rigorous climatic conditions like excessive heat, excessive rain or excessive cold, a land blessed by rivers and their tributaries and having a rich collection of vegetation, food crops, flowers, and domesticated with milch cows, they always regarded a cow as a mother a kind of wealth – "Godhana".

At one stage of our history, the fish and animal protein came to be considered unclean and unworthy of consumption by the upper caste people in India, but in no field of his choice of food the Bengali had shown himself a greater connoisseur than in selecting and consuming a very wide range of fishes, the silver crop of water, which grew abundantly in the riverine country of Bengal.

I was brought up with good foods and as a Bengali, our good foods always included an exotic preparation of fish dish, always, daily, no exemption, in every special occasions as well as a routine meal. We have some fish recipes as a dietary supplement for its medicinal properties like জীয়ল or জিওল মাছ or jiyol machh (কই সিঙ্গি মাগুর, the anabas, barbed or catfish, which can live longer in less water or চারা পোনা carp) along with the medicines, as a natural nutritive supplements, benefits a sick at a glance, and best meal for children with the staple food rice, was grown in many varieties in the past, were known by various interesting names. 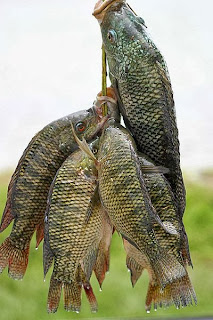 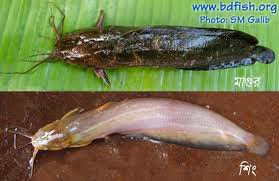 I could manage to remember one proverb from Sylhet "Mach khao te koi magur, log dhoro te sobar thakur" meaning if you eat koi magur, you will be healthier and wiser so everybody will obey you.

My parents always followed religious food rituals to follow ecological science only. We have ritually abstained eating Hilsa fish after late September due to its reproductive seasons and again traditionally introduced on Saraswati puja day (জোড়া ইলিশ - Bengali cooking ritual of twin Hilsa fish). It is interesting to state that in this connection of preservation of natural wealth there was a totem, fresh Hilsa fishes caught by fishermen are generally in the adjoining  areas of the Ganges especially the rainy season in each year, first fish is taken auspiciously. It has been custom to put marks of vermilion powder accordingly, on the body of the fish and some blades of green durva grass and some grains of paddy are put on its body, it is worshiped and given back to Maa Ganga and in the same way it also has been custom among householders to worship with blow conch-shell when a Hilsa fish brought home for consumption in a family for the first time in each year.

and most desired dish was catfish - cooked with one portion gourd and double portion of brinjal added.

Though the puritan Hindu society in ancient Bengal especially orthodox Brahmanas and any-cast-widows would on no account partake as food, cooked fish or flesh, other high protein vegetable and pulses, including onion and garlics realized the same, was on strict diet. Bengalees happily accepted the identifications from the very beginning "Machhe Bhaate Bangali - মাছে ভাতে বাঙালি" or staple food of Bengal means Fish and Rice - Rice and Fish even many archeological evidences are there to show how they loved to cook fishes. It may be noted in this connection that among the Ten Avataras (Dasavatara) or incarnations of the god Vishnu we find the names of Matsyavatara or Fish incarnation and in Vedic astrology, Pisces is the twelfth sign of the zodiac, and Vedic chiromancy the fishtail sign indicates happiness and riches.

Fish is largely partaken of by the Hindu women of Bengal, whilst unmarried or married, but a widow never partakes of it and the 11th or Ekadasi of the increasing moon is a day of close fast to a widow, it is a must fish-eating day for married woman. Greatest novelist Bankim Chandra Chattapadya's [National song Vande Mataram is a poem from the famed novel Anandamath which was written by Bankim Chandra Chatterjee] wrote a situation in Devi Choudhurani where Prafulla disobeyed Bhabani Thakur only about her meal on Ekadashi day, her eagerness of cooking fish described the situation of believe of Hindu woman the fish eating depends on lifelong married life.

Love for fish delicacy by renowned Bengali scholar was a myth, fancy of which was also carried over to all and sundry and gradually infiltrated religious rituals also.  As story goes, a time when even Vidyasagar picked up a fish head from the plate of Amirtalal Mitra and satiated his uncontrollable attraction to eat. It may be mentioned that Ishwar Chandra Bandyopadhyay did not believe in caste disparities.

Recipes process noted as stir-fry a little the climbing perch make the gravy with cumin and clove powder,

Unfortunately, in Bengal we could not save our natural wealth like vegetations, crops and other food productions etc. Now maximum varieties of foods extinct. We depend upon other states for a maximum amount of regular necessities, our food habit compromised and a large variety of fishes are needed to have passport also. The question is how to recover our Bengal as Sonar Bangla (an El Dorado) again.

Now the question is, colonization occurred in almost every state and native people adjusted and modernized their food habits and lifestyles accordingly, but in no state did it happen that their food habit or customs were modified to the maximum extent except Bengal ?

url: foodcooking-inspiration
Join me on Google+